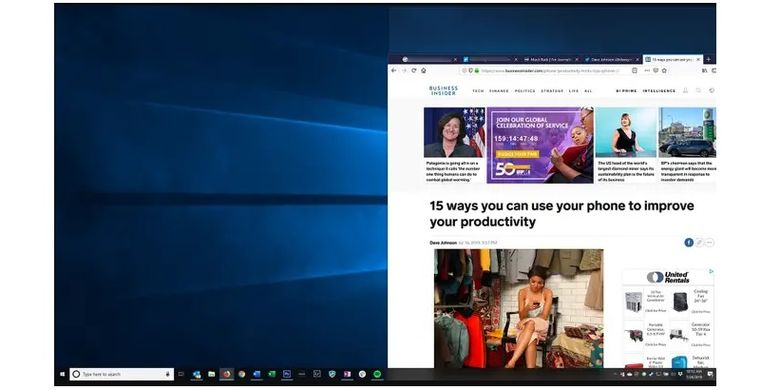 Windows laptop or PC users often open several applications at once while working. In order for the open window display to be neater and easier for multitasking, Windows 10 provides a feature called Split Screen.

This feature divides the screen display so that it contains two or more application windows at once, more neatly than just letting it float on top of the desktop view.

Split Screen can also be useful in supporting productivity by optimizing the screen area, especially for users who have wide monitors. Switching applications can be done easily without the need to close or minimize open windows. To use Split Screen on Windows 10, please follow the steps below.

Open two application windows at once

1. Select one of the open program windows, then go to the edge of the screen.

2. When the mouse pointer reaches the edge of the screen, you will see a flashing rectangular line to measure the size of the window that will appear. The screen display will automatically be divided into two. 4. All other programs currently running will appear on the opposite side and appear smaller. 5. You can select another program window to fill in the space beside the first application page.

6. The display size of the program window can also be adjusted depending on the user’s wishes. The window on the right can be made smaller than the left side or vice versa. Open three or four application windows at once

2. Swipe the first window to the edge of the screen, either up / down left or down / up right.

3. When the mouse pointer reaches the edge of the screen, you will see a flashing guide line with a rectangular shape as a benchmark for the size of the window that will be displayed. 4. To fill in the other three fields, drag the next window to the edge of the screen in the same way.

5. When you release the mouse, you will automatically see two windows on the right side. 6. On the left side, you can directly add two other program windows so that the entire screen is filled with four application windows.

7. If you want to pin four windows, slide the title bar to the top left corner.

8. Finally, click the remaining program to pin it in the lower left corner.

9. You can close the window at any time by sliding it from the edge of the screen. The Split Screen feature can be used for all Windows 10 based device users. Good luck!

PlayStation 5 Problems and How to Fix Them