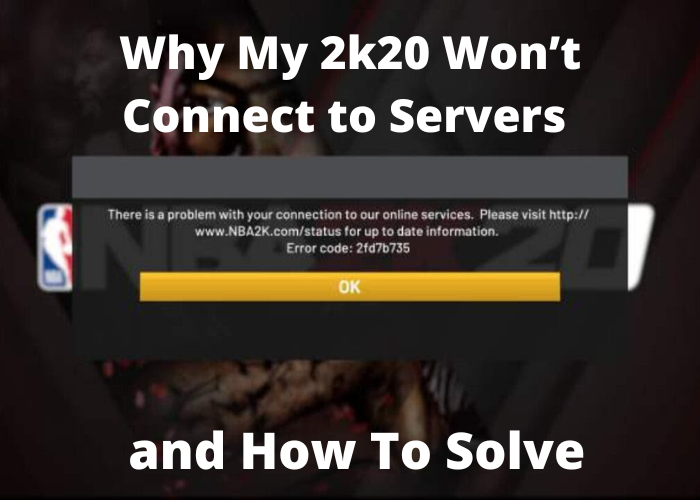 Why 2k20 won’t connect to servers and how can I resolve it? This is a typical issue that many gamers are now dealing with. If this occurs, you cannot continue playing the game until you have downloaded the most recent update.

If this is the case, you may need to wait for the files to download to your console or PC. This might take several minutes to many hours, depending on the downloaded file size and your Internet connection speed. When the download is finished, a message will appear requesting that you return to the game’s main menu so that the update may take effect.

If the download speed is abnormally sluggish, connect the Ethernet connection straight to your Windows console or PC. This will accelerate the download, especially if your system is not close to the router. If none of that works, restart your router. Unplug your router, wait a few minutes, and then reconnect it.

How do I resolve installation 2K20 issues?

If you’re experiencing problems installing games, be sure it’s not because of storage issues. Go to My Games & Apps on Xbox One to see how much internal/external storage space you have.

If you’re playing NBA 2K20 on PlayStation 4, you’ll need to verify your available space by navigating to the settings menu on your system. If you’re certain you have enough space but the game still won’t install, restart your console.

The problem of 2K20 Connection Issues

If you are unable to connect to the NBA 2K20 server, you must first ensure that the 2K server is not malfunctioning. Your troubles might be connected to Xbox Live or PlayStation Network issues, or they could be technological in nature. If all of these are enabled, we recommend restarting your router and trying again.

If your game abruptly stops in the middle of an event, you may wish to restart your console or PC at some point or another in the game.

If your problem appears unexpectedly, the issue might be with the game’s settings or compatibility. After beginning the game, you may check the game options again and try to activate the controller.

When you first start the game, you have no control over your player. It works nicely in the menu, and you can access the game’s start menu. In addition, he was named Player 3 on the chosen team. General controller configuration (opens a new window, provided it is in large screen mode)

The issue is that your MyPlayer’s name does not appear on their jersey, team, or stat card displayed during the game. At this moment, no official remedy to the 2K issue has been announced. However, according to reports, their support team has recommended some customers create a new character and submit a last name first. According to reports, 2K is now providing this new approach for gamers to play My Career in NBA 2K20. This method was not suitable for everyone.

Even if it works, most NBA 2K20 players will not be able to utilize it because they already have VC on MyPlayer. There’s also no assurance they’ll get a VC refund to use on a new player. Most likely, 2K will address this issue in a future patch that will also address other flaws in the game.

The reputation issue in NBA 2K20 is a problem that many people are experiencing; 2K has not yet resolved it on its own, but you can cure the reputation glitch yourself.

We start with the folks who helped us address the challenge. When we faced a rep malfunction in 2K20 after visiting the team practice facilities for a workout, we discovered that the problem had been resolved.

How to Fix the 2K20 Reputation Bug

How to Repair the NBA 2K20 Triple Threat Error

There is currently no solution to this problem, and the error code appears every time you try to play Triple Threat Offline. Some have said that a simple game restart will solve the problem, while others have to uninstall the game completely and download it again.

Above is the NBA 2k20 repair guide that we have compiled for you and I hope you find it useful. In addition, we have other NBA 2k20 guides such as NBA 2K20 MT Buying Guide, NBA 2K20 My Team Guide, NBA 2K20 Locker Code Guide, and NBA 2K20 Scoring Guide.

To fix this problem, pick “Play Now” and stay on the same screen until the update is noticed. Depending on where you are in the sync process, it may take some time (maybe hours) for the update notification to show. You will be sent back to the main menu when you get a message. When you do this, a loading screen will show, after which the file will apply the update. After installing the update, the game will return to the main menu.